At this point, it becomes difficult to name a celebrity who doesn’t launched her own skincare line; Still, most were surprised when Brad Pitt announced that he, too, was getting into the beauty business.

While the 58-year-old “Fight Club” actor has one of the most famous faces in the world, he’s never shown any interest in cosmetics.

In fact, in the History of British Vogue announcing the launch of The domainPitt’s new wine-inspired skincare line, the Oscar-winning actress admitted ex Gwyneth Paltrow was the person who [him] even wash [his] face twice a day…maybe.

Paltrow’s own Goop brand, which sells skincare products (among many other things), partly motivated Pitt to come up with his own line of beauty products. Like his stake in Château Miraval, the cellar he bought ten years ago with one of his other ex, Angelina Jolie; the pair is currently embroiled in a bitter legal battle above the property.

Pitt developed the genderless Le Domaine brand in partnership with the Perrin family, the same winemakers behind his Château Miraval wines, and the products are all based on the antioxidant power of the grapes.

Inside each bottle, you’ll find GSM10, a patent-pending blend of several varietals—claimed to have the “most powerful antioxidant effects”—created by oenology professor Pierre-Louis Teissedre. A second proprietary compound, called ProGR3, includes vine-derived resveratrol and claims to fight the visible signs of aging; it was developed by Dr. Nicholas Lévy, a leading scientist in the field of the rare genetic disease progeria (which causes premature aging). 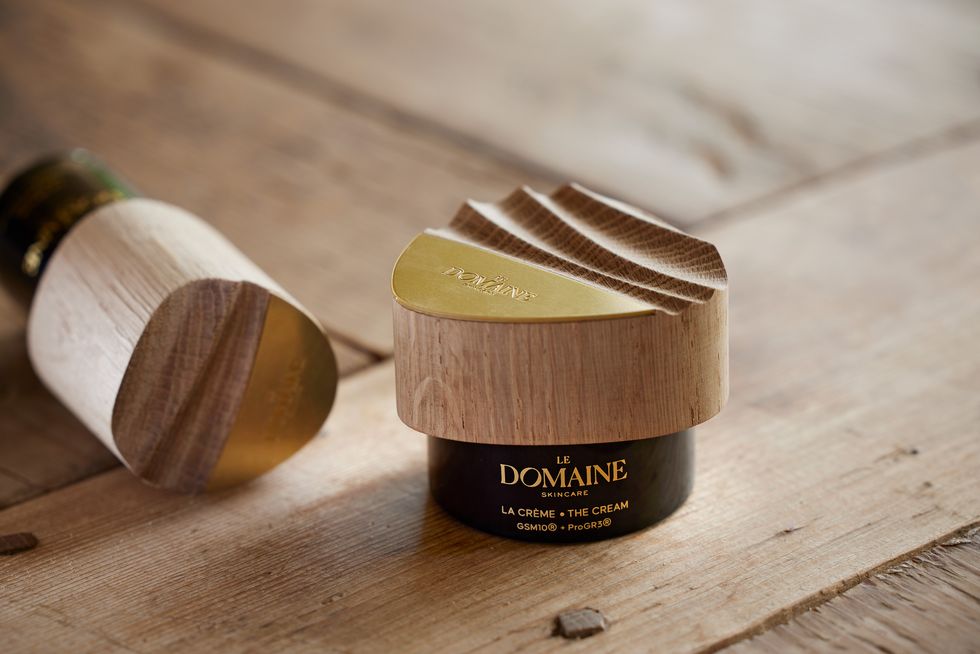 The wooden stoppers of the products come from recycled wine barrels.

“I just wish it would stop,” Stracke told Page…

But all that science is going to cost you. The Domaine currently offers three products: Cleansing Emulsion ($80), The Serum ($385) and Cream ($320), all housed in refillable bottles topped with wooden corks recycled from old wine barrels.

To find out if Pitt’s trio of products were worth its steep prices, we got our hands on the line and tested them over the course of a week. Watch the video above for our honest review of the experience, and read on to learn about (and buy) the products we tried.

Elana Fishman, Managing Editor, Page Six Style: “Eighty bucks for a cleanser is absolutely insane. That said, it didn’t dry out my face — and I have very dry skin, especially in cold weather. As a gentle cleanser, it did does its job and I really wanted to use it.

Brian Faas, Writer/Host, Page Six: “I had to look up what ‘cleansing emulsion’ meant. Is it… soap?

BF: “For that price, I think Brad Pitt should come to your house and put it on your face.”

EF: “Either that or we have to start Benjamin Buttoning the second we put it.

BF: “It feels really good on the face, though; it doesn’t sting, it doesn’t smell, it’s not too sticky. I could see other guys liked it too. If you’re only going to splurge on one of these products, I’d go with the serum.

EF: “I would agree; it seems to be the top product here. The texture is really nice, it feels luxurious, and I felt like my skin was glowing after using it. Overall, it’s a perfectly usable serum… I just can’t top the price.

EF: “The packaging is really beautiful. But the face cream is refilling costs $270, which means you pay $50 just for the cap. It is very expensive wood!

BF: “Spending a lot of money on [skincare] it’s like buying a lottery ticket; you buy the fantasy. But every time I used it, I thought of Brad Pitt, which isn’t a bad way to start the day!

EF: “It’s not the richest face cream I’ve tried, but it’s nice – moisturizing, not too heavy, didn’t make me break out.”

BF: “I really felt dewy after using it.”